Every parent should be keep informed of Florida custody and visitation laws (time sharing). Establishing child time sharing arrangements in a divorce or other separation are often the most difficult challenges parents must face. Courts deciding these matters will always make a decision based on the best interests of the child.

The Florida legislature recently enacted laws abolishing the concept of “primary” and “secondary” child custody as well as “visitation,” replacing them with “parental time-sharing.”

These recent changes come as a result of the recent inundation Florida’s court system has experienced regarding custodial litigation over which parent is to be considered as the “Primary Caregiver” or “Primary Child Custodian.” Typically, the title has been a determining factor as to where a child spends most of their time as well as which parent will be required to pay child support. The conflict that many secondary child custodians were encountering was that while many were caring for the child up to 50% of the time and in many cases providing for the child, they still did not have the same legal rights to determine important decisions for the child and were still forced to pay child support in addition to monies spent caring for the child during visitation. 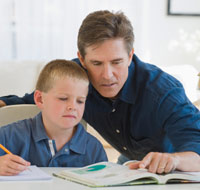 Many parents also believed that, if they were deemed the “secondary” child custodian, then they were also a second-class parent. This led many parents resenting the fact that they had to “visit” the child rather than live with or spend time with the child. In an effort to help parents avoid fighting over semantics, the Florida legislature adopted the concept of “time sharing” in the spring of 2009 to replace the old regime of awarding custody to one parent or the other.

The Florida Family Law Clinic has considered this new legislature as step forward in modernizing the laws to suit social trends and the existing family model. The Florida based family law firm advocates that it is in the best interest of most families for children to have equal time with both of their parents. Since the mother has stereotypically been deemed as the Primary Child Custodian in the majority of child custody proceedings in past years, especially where children under the age of 5 are considered, this legislature considers a multitude of critical factors to ensure that the child’s best interests remain the focus of family law proceedings and not the parents’ personal agendas.

The following is a list of the critical factors, to support the best interests of the child(ren), considered by Florida courts for the establishment of shared parental responsibility and time sharing:

Contact us today for your free initial email consultation or call us by dialing calling the phone number for your area. For your convenience, we offer evening and weekend appointments, and accept all major credit cards.